The Murder of Ethiopians an Attack on Human Values

The atrocious murder of Ethiopians by the so-called ‘Islamic State’ in Libya is an outrage and an offense against Islam and all the civilised values for which Muslims stand. As an Ethiopian Muslim, I am angered, saddened and sickened by this latest crime committed by vagabonds and criminals who have stolen the label ‘Islam’ from the hundreds of millions of devout and decent people to whom it properly belongs, and defaced and desecrated this religion for the purposes of sowing hatred and intolerance. My sympathies and solidarity are with the families of the dead: to them I extend my deepest condolences.

The Prophet Mohammed, peace be upon him, had a very special relationship with Ethiopia, of which all Muslims should be mindful. An Ethiopian named Bilal, a companion of the Prophet, was the very first muezzin.

When the Muslims were persecuted by the Qoreish in Mekka, the Prophet sent a contingent of his followers across the Red Sea to seek safety in Ethiopia. The Prophet was confident that the Ethiopians would be hospitable, tolerant and protective, and indeed they were. The Muslims were received by the ruler of Axum, whom Arabic tradition has named Ashama ibn Abjar, who gave them land in Negash, and refused the demands of the Qoreish to return them to Arabia against their will. The Prophet Mohammed recognised and celebrated Ethiopia’s tolerance and protection.

This last weekend, at the annual Tana High Level Forum on Security in Africa, the leading Islamist from Tunisia, Rachid al Ghannoushi, insisted that God created diversity: He created people with different skin colours and different cultures and faiths. To insist on homogeneity and to seek to impose it by force would be a crime against God’s will.

As an Ethiopian Muslim, I am totally confident that the Prophet Mohammed, peace be upon him, would congratulate and support Ethiopians for continuing the tradition of multi-religious tolerance that he himself recognised, and from which his own companions benefitted.

I am equally certain that the Prophet would regard the criminal act committed by the vagrants and vagabonds of the so-called ‘Islamic State’ as heinous offenses against his teachings.

The atrocity committed by militants against Ethiopians, following on from their massacre of Egyptian Christians in February and their catalogue of killings and violations against Muslims, Christians, Yazidis and others in Syria and Iraq, is an attack on the most basic human values. It is also an attack on African Islam, which has always been characterised by tolerance and diversity.

I am certain that Ethiopians of all faiths share my outrage at this unspeakable crime, and that all of us are truly disgusted by this travesty of Islam. At a moment of national tragedy like this, we must reaffirm our shared Ethiopian values of national tolerance, of unity in diversity, and of commitment to the human rights of all.

Chief of Staff for the African Union High Level Implementation Panel on Sudan. 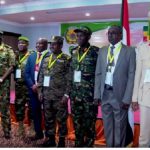