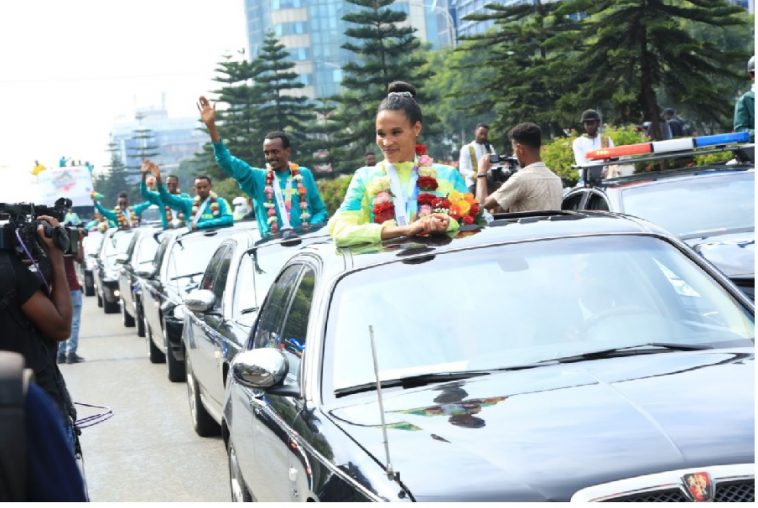 More than 1,500 world class athletes from 200 countries participated in the 18th World Athletics Completion. The athletes who participated on the tournament registered a record result standing second in the world and first in Africa at the medal list with a total of ten medals which included 4 gold, 4 silver and two bronze medals.

The Ethiopian athletics delegation was accorded elated and rapturous national welcoming ceremony upon arrival.  Minister of Culture and Sports, Kejela Merdassa, Minister of Women and Social Affairs, Dr. Ergoge Tesfaye and State Minister of Foreign Affairs, Birtukan Ayano as well as higher officials from various ministries and commissions, former champions in world and national athletics tournaments and families of the athletes attended a mammoth welcoming event upon which the athletes were decorated with flower neck wreathes which symbolized their victory.

After spending their night at the Skylight five star hotel, on the 28th of July, the athletes and the entire delegation of the Ethiopian world athletics championship team toured Addis Ababa starting from St. Stifanos Church to Arat Kilo, Piazza, Churchill Avenue and Meskel Square accompanied by unprecedented ululation and cheering from the crowd of people gathered on the avenues and streets across the city.

Later on in the morning, the athletics team was welcomed to a splendid award ceremony at the National Palace upon which financial wards were delivered to each team member by President Sahelework Zewede, the guest of honor for the event at the presence of higher government officials and representatives of the diplomatic mission.

The athletics team was provided with financial gifts amounting up to 2 million Birr depending on the level of medals they have received and  level of their participation in the team.

Speaking on the occasion, Commander Derartu Tulu, President of and member of the team expressed her gratitude to all team members, partners and stakeholders who contributed to the achievements of the athletics team. He noted “ We were able to win medals because we were mindful of our mission and kept our unity and spiritual unity in acting in unison.”

She added that “we need to prioritize the national honor and interest of our country above and  beyond our personal interests. We need to adhere to our responsibilities and lofty goals for which we should strive.”

Derartu has also said that athletes of her generation enjoyed a golden era in world and regional athletics tournaments and declared that the current new blood of our athletes need to bring forth the diamond era in the history of athletics in Ethiopia.

Earlier in the week, Major Haile Gebreselassie, a former Ethiopian world class gold medalist said “what we gained through our athletes is far more significant than the gold, silver and bronze medals they have won for us. The source of our happiness is not only the medals but the unity that our players displayed to make Ethiopia win”.

In the afternoon of the 28th of July, the Addis Ababa City Administration City Council organized a welcoming and ward ceremony for the athletics team in which a total of 10 million Birr and plots of land was awarded to 9 athletes in Addis Ababa.

The historic victory registered by the heroic and heroine Ethiopian athletes at the 18th World Athletics Championship is of greater significance for so many reasons. In the first place it was conducted amidst mounting pressures by the western power who try to make us choose between our sovereignty and territorial integrity or submitting to their interests by supporting all anti-Ethiopia forces who are out to destabilize and destroy the statehood of the country.

Nonetheless, Ethiopia is grappling with manmade and natural calamities that are seriously affecting the economic development of the country. This country is struggling to recover from the aftermath of the COVID-19 pandemic which also seriously affected the economic progress of many African countries.

The victory registered by our athletes have now become a source of aspiration and national optimisms which would enable the Ethiopian people and government to cruise through multiple sets of challenges and tribulations that the country is forced to face. The results have filled the hearts of Ethiopians with joy and help to sustain Ethiopia’s march towards development.

Moreover, the bell has now toll for strong unity among all citizens in the country and in the diaspora. The team spirit that our athletes demonstrated at Oregon, USA is far more relevant and needs to be applied at all levels of public and private life among citizens here and in the diaspora. In a country like Ethiopia where there is appalling ethnic divide; team spirit is of crucial importance to ascertain the fulfillment of the multiple levels and types of development programs and projects in the country.

A new revival has now set in to ascertain a higher level of positioning and rootedness of the Ethiopian athletics feat in the world arena as Derartu has said, similar tempo of preparedness should be ensured to keep the standards of Ethiopian athletics. The current success should be taken as a showcase for yet another sustained victory needs to be repeated in a similar event at Hungary, Budapest. 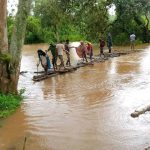 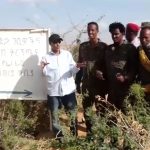