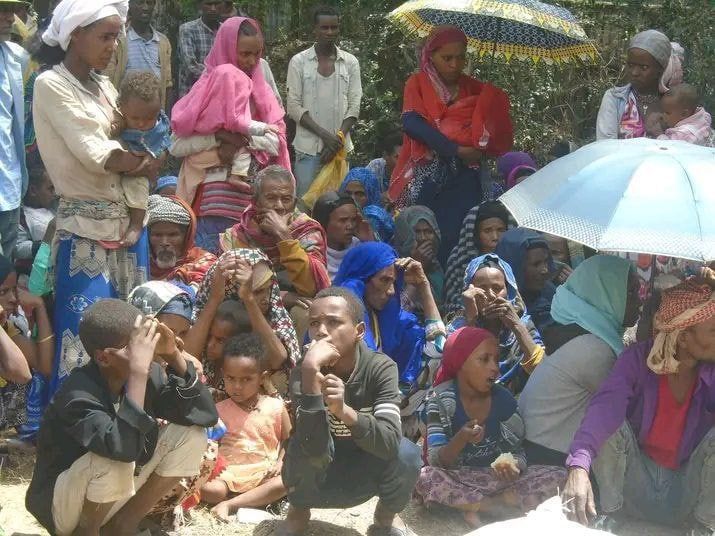 The plight of thousands of civilians from across Wollega who fled sustained attacks have continued in the areas they are seeking refuge in. Some of them have been relocated to different areas of the Oromia region while many are sheltered in the Amhara region. Addis Zeybe has visited those who are staying at an IDP camp in the South Wollo zone.

More than 5,000 people – including children and women – who fled the June attacks in Wollega, are currently sheltered in the ‘Jari’ camp in Hayk. The town is 50 kms away from Dessie, Wollo’s capital, and 450 kms north of Ethiopia’s capital, Addis Ababa.

Jari camp was established in the late 1970s by the then government for orphans who lost their parents during the famine Ethiopia suffered at the time. The camp is now overseen by the Hayk town’s administration.

After she escaped the killings with her three children from an area called Jerti in Wollega, Alemnesh Eshetu was brought to the camp in Hayk town. Alemnesh said husband was killed by the Shene army a year ago. When the armed group returned to their neighborhood this June, she had to leave with her children. They were forced to walk through a forest for more than 10 days until they entered the Amhara region and found rescue.

“It was a very painful trip. Traveling by foot with children without food and water is the worst experience,” said Alemnesh. She told us the responsible bodies who welcomed them to the Amhara region brought them to Hayk town’s Jari shelter on July 2.

Among the IDPs at Jari camp

The killings carried out in June in Tole Kebele, Gimbi Woreda of West Wollega zone were the deadliest in recent months. Ahmed Addise, who used to be a resident of the area, managed to escape the attacks and is now at Jari camp. He told Addis Zeybe that he counted more than 200 bodies there. “It was the most horrible thing we have seen in our lifetime,” said Ahmed, adding: “We buried them in mass graves.”

There have been recurring massacres and sustained attacks in the West Wollega zone of Oromia region for the past three years now, targeting ethnic Amhara communities who lived in the zone for generations. Following the incidents (targeted attacks) in Wollega in June and July 2022, more than a hundred civilians were massacred and buried in mass graves. The Oromo Liberation Army (OLA) – adressed as Shane by the government is claimed to have a clandestine structure within the government, including at the Federal level, is alleged by human rights groups and the government to be behind the massacres. However the group repeatedly declined the allegations.

The Ethiopian Human Rights Commission said in June that the killings occurred following “clashes between government forces and Oromo Liberation Army (OLA/Shane) militants” and the “attack by the armed group” against civilians has “resulted in severe civilian casualties, injuries, & property damages.”

The Oromia Regional State government blamed the rebels for the killings and vowed “federal and regional security forces will continue to crack down” the structure of the armed group, which has been designated as a terrorist group by the Ethiopian Parliament. However, Odaa Tarbii, OLA International Spokesperson, said in a verified Twitter page that “the killings and property destruction that occurred in Tole, Gimbi district were committed by a militia dubbed as  “Gaachana Sirna” (defender of the system) created by the Oromia Regional State itself.”

Hassan (who is only named by his first name over fears for his safety if he returns) told  Addis Zeybe that the targets were “local Amhara community” that settled in the area about 30 years ago and said they were being hunted like animals. Hassan is a father of five children who is now sheltered at Jari camp in Hayk town. He took flight with his family from the assaults in the Horogudru Jerti woreda of East Wollega zone in June.

“The terrorist group kept coming and taking our cattle. We have been trying to defend ourselves as much as we could. But then, when they came around 8 o’clock that night (June 15), and started burning the house where we were sleeping in, we were forced to flee the area in the dark to save ourselves and our children.”

Hassan said he and other men went back to their former neighborhood after they took their wives and children to safety. However, they found that their property had been looted and the rest had been burnt. They then notified the situation to the area’s security office. Hassan said: “The officials told us that they cannot help us because it is beyond their capacity. After that, we decided to come here because we lost hope.”

Ali Ahmed, another displaced person, told Addis Zeybe that the government should protect the Amhara community living in the Wollega zone so they won’t be attacked again. He also explained the difficult situation they are living in the shelter in Hayk town.

“How long are we going to live here with poor aid? The government should facilitate things for us to either return home or have a better life here,” says Ali. Ali and other displaced people from Wollega, who are currently taking shelter at Jari Camp, complain about the government’s poor handling of the situation.

Ibrahim Yimer, head of South Wollo Zone’s Disaster Prevention and Food Security Department, said that the displaced people are being helped by the community and the government is working to provide clothing and shelter. He added: “As of the end of July, the number of internally displaced persons in the South Wollo zone stands at 36,000, including children and women. 29,000 of them are from Wollega.”

According to Ibrahim, as a result of the recent violence in Wollega, another 1,000 new IDPs have arrived in South Wollo and the number grows as IDPs continue to flow. “These people are in urgent need of food, shelter, sanitary items, and healthcare” added Ibrahim.

The United Nations Office for the Coordination of Humanitarian Affairs (OCHA) disclosed in its July 22, 2022 report: “The overall humanitarian situation in Ethiopia has significantly deteriorated in 2022,” citing the ongoing conflicts and the prolonged drought in some places. The report says more than 29 million people are estimated to need humanitarian assistance and protection in 2022; nearly three quarters of the number being women and children. 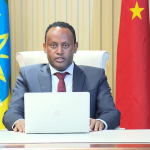 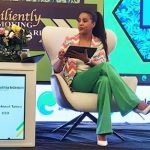