Addis Ababa April 29/2022 /ENA/ Ethiopian Diaspora members who responded to the Eid-to-Eid Homecoming Initiative have called on citizens to keep detractors away and maintain peace and unity.

Among the members Oumer Abdurahman from Saudi Arabia told ENA that there might be hick-ups in the country as Ethiopia is in transition.

However, the Muslim community needs to understand that real change is taking place in the country, he said.

According to him, the call of Prime Minister Abiy Ahmed for Eid-to-Eid Homecoming to Muslim members of the diaspora symbolizes the change taking place in the country.

No matter how hard detractors try to spoil the growth and equality in this country, the Muslim community needs to understand how the believer has to achieve the final goal of equality and stability in the country, Oumer elaborated.

At the end of the day, he noted that internal disagreements, disunity, and civil wars will cost a lot and force the country to extend its hand for support.

He further pointed out that fighting each other has no benefit for all, but for those foreign powers that keep trying to trigger civil war in Ethiopia.

” Everybody needs to know that, be it the West or East, they work to keep their interests and benefits,” he added.

This country is in a strategic place, Oumer stated, adding that there cannot be a better way to exploit this country other than taking its peace and brewing instability.

“In the name of supporting our country’s peace, foreign powers will exploit it. That we must know!”, he underscored.

Abdulaziz Oumer, who was born and raised in Saudi Arabia, said on his part a lot of positive change is going on in this country right now.

“Regardless of the political problems and religious problems happening here and there, there are lots of good things going on in this country,” he added.

Having such a great initiative like Eid-to-Eid Homecoming is among the great incentives for the Ethiopian Muslim Diaspora community.

“The way our country is being portrayed in the media matters,” Abdulaziz stated, stressing that the role of the diaspora in this regard is to fix the image of the country and show it is safe. 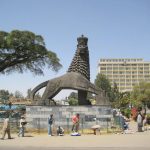 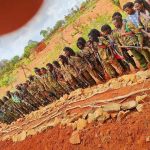