When Ahmed Shidie became the Minister of Finance in 2018, soon after Prime Minister Abiy Ahmed (PhD) assumed power, Ethiopia was in the midst of reforms that many in the west hoped would transform the economy of a once thriving nation. Assisted by his comrade, Eyob Tekalign (PhD), State Minister of Finance, Fitsum Assefa (PhD), then Planning Commissioner now Minister, and Mamo Mihretu, policy advisor of the Prime Minister and now also heading the Ethiopian Investment Holdings, Ahmed formulated what the government calls “The Homegrown Economic Reform Agenda.”

Over USD nine billion poured-in in order to support the economic blueprint. The two Bretton Woods Institutions, the World Bank and the IMF, immediately reacted to the liberalization reforms introduced by the government. Not only did they shower the government with praise but also extended a helping hand to provide the necessary finances.

The World Bank went as far as making a direct budgetary support; an initiative that was paused for over a decade. The European Union, the French Development Agency (AFD) and the UK’s DFID, now replaced by the Foreign, Commonwealth & Development Office (FCDO), followed its path.

But the situation started to change a year later.

First, the emergence of the coronavirus pandemic forced Ahmed and his comrades to revise their plans. The economy found itself in the middle of crisis fueled by the conflict in north Ethiopia, taking them back to square one and external aid drying up. Borrowing from external lenders became difficult more than ever. Displeased with the government’s response in averting a humanitarian crisis in Tigray and ending the war with the TPLF in the north, the West turned its back on the Horn of African nation, making the task of financing the economy more challenging.

Ahmed told his fellow ministers to cut budget but that did not bring a change.

His attempt to reduce government expenditure during a series of discussion on budget proposal made by government offices this year, did not arrest the widening budget deficit, which is projected to reach a historic high 309 billion birr, accounting for 4.5 percent of the country’s GDP, higher than the three percent threshold recommended by the IMF.

Out of the 786.6 billion birr budget allocated for the coming fiscal year, 44 percent goes to recurrent expenditures that are unrelated to capital development, which experts usually find unproductive to the economy.

The principal cause of the surge in the recurrent budget is the rising trend of military spending. The share of defense from the recurrent and capital expenditure is almost 15 percent, way higher than what the government planned to invest in roads, education, water and energy sectors.

This is a little different from the trend observed during the military regime, Derge, and the Ethio-Eritrean war under the rule of the then EPRDF. It was only during the Derge regime that Ethiopia saw the share of defense reach 26 percent from the total budget of the country and remained in single digits for long, except for the period when Ethiopia was at war with Eritrea in 1998.

As of now, the war in northern Ethiopia and the fighting with groups in Oromia Region together with the border dispute with Sudanese government are believed to inflate the budget allotted for the defense sector.

This coincides with the maturity of external loans borrowed by the government in the last decade. Budget allotted to service debt accounts for 22.3 percent of the recurrent and capital expenditure.

The global economy is not supportive at this critical time.

A surge in some commodities like fertilizers necessitated government subsidies. Such changes mean the government needs 239 billion birr to service debt, finance the army and subsidize fertilizer for farmers. Financing this requires exhaustively utilizing tax and non-tax sources of revenue but that can only bring about 477 billion birr in government revenues, making the task of financing the deficit tough.

The tax collection also seems to grow slowly so far, with 282 billion birr collected in 10 months. A 51 billion birr jump recorded in last year during the same period. The tax revenues never matched with the growth of the economy, with the tax to GDP ratio standing at less than 10 percent, seven percentage points lower than the sub-Saharan average. While this has been a source of worry for policymakers for long, the existing situation in the country is making the taxable economy hard to tax.

“The instability across the country and the war in the north made the taxable economy untaxable,” said an Economist with over 20 years of experience in policy making and investment consultant.

Officials want to use all the tools at their disposal to finance the deficit. They want to generate 161.6 billion birr from the sales of Treasury bills and they expect 30.2 billion birr in aid.

External lenders are also expected to pour 26.3 billion birr this year, as Ethiopia rebuilds its relations with the west, which determines the success of securing finances from such sources. But turning this into a reality depends on the global economic situation and the political climate in the country.

Alemayehu Geda (PhD), professor of macroeconomics and international economics at Addis Ababa University, has been following the country’s macro-economic situation for several decades and has published papers.

For him, the widening budget deficit is not surprising at all. He fears the repercussions of the coronavirus pandemic, the conflict in northern Ethiopia and the Russia-Ukraine war would still have a catastrophic impact on the economy.

“I fear the worst is yet to come, as myriads of problems remain untold,” said Alemayehu.

How the deficit will be financed remains to be the biggest question as it depends on where exactly the money would be sourced from and whether the mechanism applied would bring more harm than good to the economy.

Ahmed hopes domestic loans secured in the form of treasury bills and bonds would be the largest source of revenues to finance the deficit. It is a tool used exhaustively on the current fiscal year, though it was not sufficient enough.

“Resource mobilization from the local market for the bonds will barely help in the attempts to fulfill the deficit, given the current market’s weakness and exhaustion by the financial institutions on the push,” said the economist.

Having no better options now, the expert fears the government will most likely embark on direct advances via printing money.

“Loans from the market is a dead option now, given the status and last year’s experiences of the central bank and other financial institutions. So what is at stake now is the direct advance,” said the expert, adding “Direct advances have massive inflationary consequences.”

Parliamentarians are concerned too.

“National security can’t only be guaranteed with high budget for defense and security, but also on works that improve citizens’ lives, eradicating youth unemployment, and on poverty eradication programs,” said Christian Tadele, a Member of Parliament representing the National Movement of Amhara (NaMA).

“The budget is pro-development. No poverty eradiation project is cancelled, despite surges in budget for security reasons,” stated Ahmed Shidie.

But what is more concerning for experts is the less emphasis given to rebuilding the economy.

“More focus on the recurrent expenditure in short means killing the future as it contributes less to improve productivity and never focuses on reconstruction,” said the expert, adding, “This year’s budget for me shows how deep the effect of the war went, and we can simply forecast the worst to come.”

Yet experts have their eyes wide open with their biggest concern being the measure taken by the government to fill the budget deficit. They see direct advances being the easiest option at stake for the government, even though it would come with high inflationary and macroeconomic risks, which has a potential to wreck the economy that is already between a rock and a hard place. 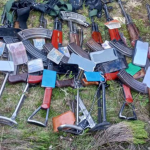