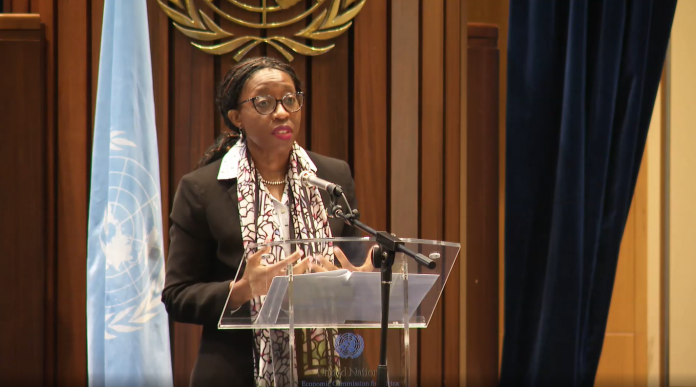 Addis Ababa August 3, 2022(Walta) – Executive Secretary of the Economic Commission for Africa (ECA), Vera Songwe, said inclusive efforts need to be exerted to address the immediate impacts of climate change in Africa.
The executive secretary made the remark at the opening of the three-day African Regional Forum on Climate Initiatives to Finance Climate Action and the SDGs today.

Urgent development funds need to flow from the Resilience and Sustainability Trust, she said, adding that Multilateral Development Banks must increase the flow of funds into sustainable infrastructure.

Songwe pointed out that Africa’s infrastructure financing gap is estimated at between 130 billion and 170 billion USD annually until 2025.

According to her, 55 million people are facing food insecurity in the Horn of Africa due to the combined impact of successive years of drought and food chain supply disruptions.

“Funds need to (therefore)flow to address loss and damage, while we invest in climate resilience for the longer term.”

Stressing the need to scale up private sector investment, she noted that the promise of the 100 billion USD of climate finance has yet to be achieved as the needs of African countries continue to increase.

The executive secretary stated that while a rebound has been observed in private sector investment in renewable energy in 2021, overall investment pledges are 12 percent lower than the five previous year’s average.

Thus “we must develop Africa’s sustainable finance market,” she underlined.

In this regard, the ECA has launched a Liquidity and Sustainability Facility (LSF) to improve market access for African countries by increasing the liquidity of their debt instruments and private investors’ demand for these instruments.

The LSF could save African issuers up to 11 billion USD over five years in interest costs.  In addition, the facility aims to incentivize SDG-linked investment, including increasing green bond issuances, it was pointed out.

”We need to simultaneously invest in mitigation and adaptation for development. The best projects presented in this Regional Forum will allow Africa to adapt to climate change while creating low-carbon development pathways and sustainable livelihoods,” Songwe said.

The executive secretary further said ”we need to incentivize the link between reducing emissions and the mobilization of revenues. Carbon credits offer an opportunity to raise reliable revenues for Africa, incentivizing low-carbon development and attracting investments to support livelihoods.”

All in all, we need to create sustainable value chains and invest in a green digital transformation, she noted.

Finance Minister  Ahmed Shide said his part Ethiopia is one of the climate change victims and highly affected countries.

Yet the developed countries are not even willing to fully contribute the 100 billion USD they annually agreed to pay for developing countries, he added.

The meeting will help to take a stand at the continental level on global climate change sessions to be held in the future.

The minister also pointed out that Ethiopia’s Green Legacy initiative, which was launched in 2019 targeting to plant 20 billion seedlings in four consecutive years, is also part of the green resilient economy, according to ENA.