When Satellites Capture a Crisis

How one research team is telling the story of Ethiopia’s civil war.

The big idea: How satellite imagery is helping tell the story of Ethiopia’s war

It was just after midnight on the first day of March 2021, and Emnet Negash was worried about home.

As a doctoral student in Belgium, he was far from his family in Tigray, in northern Ethiopia, where a civil war was raging in the dark — cut off from the rest of the world by a strict communications blackout imposed by the government. He wondered if his family was safe, and if his hometown, Adigrat, was still standing.

So he opened Google Maps. Zooming in, he saw debris scattered across the town and buildings partially or completely missing, the altered aerial outlines of what once was a hotel, a public library, an office for humanitarian assistance. He feared it was evidence of fire and destruction.

“I saw what appeared to be the total collapse of some buildings,” he said. “It was unimaginable. I couldn’t work for a couple of days.”

He later published his findings with his geography colleagues at the University of Ghent, using satellite imagery to document the ruinous effects of the war. The group is one of the few teams in the world dedicated to gathering and publishing remote sensing data about the conflict — and its impact on the land, cities and people in northern Ethiopia.

The team’s work, along with citizen reporting and rare dispatches from journalists who have gained access to the Tigray region, has formed a patchwork sense of what is happening — one that is incomplete. Satellites are helping to fill the gap where war correspondence falls short.

From soil analysis to documenting war

Jan Nyssen, a professor of geography at Ghent University, has been studying Ethiopia since the 1990s, analyzing soil erosion and land degradation in the country’s highlands. The work was relatively placid — until a brutal civil war broke out in the same region he once visited for fieldwork.

The Tigray region is an ancient kingdom in the far north of Ethiopia, spread across jagged peaks and lush farmland. The leaders of the region, which is home to about 6 percent of the country’s 110 million people, ruled the country after they helped dismantle a military dictatorship in 1991. They became Ethiopia’s arbiters of power and money until 2018, when anti-government protests catapulted Abiy Ahmed, a peace-talking young reformer, to power as prime minister.

The 25 Most Significant New York City Novels From the Last 100 YearsThe Rise of the 0.5 SelfieWhat Should You Do When Your Partner Lies About His Earnings?

In November 2020, Abiy, winner of the 2019 Nobel Peace Prize, launched a surprise military offensive in the Tigray region — one described as a systematic campaign of ethnic cleansing by an internal U.S. government report. The ensuing civil war in Africa’s second most populous nation has pitted the national military against rebels in the northern region of Tigray, leaving thousands dead, forcing more than two million people from their homes and pushing parts of the country into famine-like conditions.

Throughout the war, accessing accurate information about the conflict has been difficult at best, as a communications blackout has left most of the Tigray region without access to cell service or the internet. Suddenly, Nyssen’s training in satellite image analysis took on a macabre relevance in studying a region cut off from the world.

Nyssen, Negash and the rest of the team turned to Sentinel Hub and Google Earth to study the scale of destruction. From aerial imagery, they tracked the visible imprints of war — debris on roads signifying looting, burned buildings signifying marked violence — on villages across the country. However, the images can only reveal so much.

“All we have is satellites. What we really need is reporting on the ground,” Negash said, adding that it was often difficult to determine who was responsible for the destruction. “The information is very, very limited. And we’re combating a world of propaganda.”

The remaining gaps in information

In an effort to control the narrative of the conflict, the Ethiopian government has tried to limit critical coverage with a campaign of arrests, intimidation and obstruction targeting foreign journalists. While two Times journalists, Declan Walsh and Finbarr O’Reilly, gained access to Tigray and were able to independently verify reports leaking out of the region, few foreign journalists have made it into the country — or have made it out without being detained.

The threats extend to civilians, limiting access to videos or images taken on cellphones.

“I have tried to ask my colleagues at Mekelle University if they would travel around Tigray and verify what we are seeing from remote sensing,” Nyssen said. (Ethiopian forces left Mekelle, the capital of the region, last summer.) But fulfilling Nyssen’s request has been hindered by myriad logistical challenges.

“Transportation is very expensive,” he said, citing a lack of fuel access. “They need to be present with their family because everybody is in survival mode and there is no bank service so we cannot send them money.”

Additionally, aid worker access has been limited at times to a single, dangerous road into the region. Last year, three aid workers from Doctors Without Borders were killed while working in the region, underscoring the threats to those providing needed assistance in a region facing widespread food insecurity and starvation.

It’s a scale of need the team at Ghent University can only guess at, using satellite imagery to deduce the scale of damage to irrigation infrastructure and the visibly altered landscape where crops once grew.

The hard work of verification

While the team members have aggregated what information they can from satellites, they have also undertaken the difficult work of corroborating their findings with personal interviews and the available reporting from those on the ground. They spend much of their time scouring social media for information and waiting for patchy calls from the region.

“People will go to the mountain tops on the border to get mobile access,” Nyssen said. “It’s dangerous, and it often drops out after only a couple words.”

Still, he said, Tigrayans “will travel, hike and call just to say, ‘We are dying.’”

For Negash, the research has been personal. Discovering signs of destruction in Adigrat, his hometown, gave him evidence to cite the next time he was able to speak on the phone with family and friends still in the region.

“At first, they didn’t mention the destruction of these buildings, because that was sort of a minor thing for them compared to the loss of life,” he said. “They hadn’t told me about it because they were too traumatized to speak about it.”

In probing for more details, however, Negash pursued heartbreak. “I believe I’m one of the people who have better access to information,” he said, speaking about the welfare of those close to him. “But so far, I have learned that seven relatives have gone, including my grandma, two uncles, two friends, very close friends. Should I keep going? The list is long.”

Still, Negash is more afraid of what he doesn’t know than what he has learned.

“Many people have died. But we don’t know about the magnitude of loss” of life, livelihoods and infrastructure, he said. “My fear now is that we will be only able to discover that after they reached an unrecoverable state. And it will be too late.” 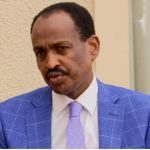 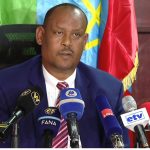