We read the story headlined, “Dilla Intends to Use World Bank Money to Erect Monument” (Volume 15, Number 762, December 7, 2014). We appreciate the fact that you have reflected the views and actions taken by the World Bank. There was just one incorrect fact where the story refers to ‘abuse’ in Hawassa. International Development Association (IDA) funds were not used to build the monument there but a cultural centre to exhibit the culture of the nations and nationalities of the region. What the Bank asked for was a business plan for the centre designed to ensure that it not only generates income but is sustainable. 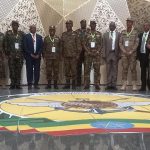