Ethiopians frequent traditional steam baths just as much for their healing properties as for helping them to maintain a beauty regime. This age-old practice is popular across parts of the country and can be seen in evidence at the magnificent 17th century Fasilides Castle of Gondar, known locally as Wusheba Betoch.

Fasilides Castle, which also goes under the name of Fasil Gimb, is located in the historic city of Gondar in north-western Ethiopia. This vast complex is where Emperor Fasilides and his successors each built their own castles within a span of two centuries. The fortifications lie on 70 thousand square meters of land, surrounded by a 900 meter-long wall.

This royal enclosure, which is registered by UNESCO as a world heritage site, boasts 12 entrances and contains castles, palaces, churches, a library, monasteries, and other private and public buildings. The steam baths (Wusheba Betoch) are among the most notable of the buildings on site.

There are three steam baths inside the fortified walls of Fasil Gimb. The first steam bath was built between 1630 and 1670 by King Fasilides, due east of his own living quarters. The second one was built by his grandson, Adyam Seged Eyasu. The third one is found even further east of Eyasu’s castle, built by Empress Mintwab, an 18th-century princess. The once prestigious baths, however, are now all in ruins.

The steam baths were built with local materials just like the rest of the buildings in Fasil Gimb. The basalt rocks, commonly found in the area, combine with red rocks dug out from places called Kuskuam and Jibwasha around Gondar. Both were used in the construction of the baths.

Apart from the rock, woods from oak-like trees called gmarda and denbeka were used as pillars for the steam bath quarters. These once were widely-grown trees around Gondar but no longer exist there now.

To hold the carefully carved stones together, the constructors made use of ground rocks, sand, and a mixture of egg whites with ground limestone. The egg whites-limestone mixture, applied to the inside walls, has made the walls smooth and white. This mixture is believed to be the most important component in tightly preserving the Wusheba walls for over a hundred years.

The first room is where furnaces are installed. The fire burning in the furnaces heats the large basalt rock put in the second room. The second room is situated above the first one. The heat passes through openings between the two rooms.

The third room is where the people using the Wusheba keep their clothes and jewelry. Cow horns were crafted into hangers and installed on the walls to hang clothes.

The main steam bath is found in the fourth room. Steam is created when water is poured over the large rock that is heated by the fire from the furnaces. The steam enters the Wusheba room through holes in the wall. The fifth room is where individuals relax and cool down their bodies after their stay in the Wusheba. The steam chamber has ventilating tubes in the ceiling so that people won’t suffocate in the bath.

Fentahun Yalew, head of the Gondar City Heritage Tour Association, said the Wusheba baths were like the modern-day sauna baths. “It is said that people who came here for Wusheba regained their health and beauty back. It was a treatment center for the sick and a relaxing spot for the worn-out,” says Fentahun.

The water used for the Wusheba was fetched from rivers with clay pots. During winters, they collected rainwater that came through pipes attached to the towers’ walls. Leaves of different trees and shrubs believed to be curative were also crushed and put in the water.

Mezemer Abiy, the architect of the Gondar City Heritage Building, told us that these Wusheba quarters have long been out of use. The towers have collapsed with the rocks eventually falling out and generally, the quarters are turning into ruins.

These quarters were frequented by the royals. But there is another Wusheba tower the public used, which is 200 meters away from Fasil’s swimming pool. This public steam bath used to be called ‘chicken house’ because the steam bath users were “boiling in hot water like chicken instead of having a bath with cold water like humans”. This place is still called chicken house.

The castles, palaces, and other buildings in the Fasil Gimb were built with diverse architectural influences like those of Arabs and Europeans. Of the sophisticated quarters in the enclosure, Fasil Pool is still being used, especially during the celebration of Epiphany, the baptism of Jesus Christ. 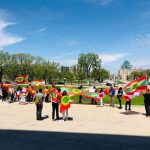 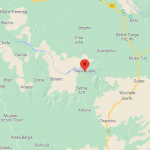