Given the current challenge environment in the country, the performance is remarkable, according to Frehiwot.

The CEO further stated that the performance was a result of network and system expansion and optimization works to enhance customer experience and satisfaction by offering 67 new and 77 revamped local and international products and services.

The revenue share in terms of service types shows 51 percent share for mobile voice, 27 percent for data and internet, 10 percent for international business, 5.7 percent for value added services, and 6.6 for other services.

The number of subscribers has reached 66.59 million, achieving104 percent of the target, and increase of 18.4 percent from the same period last Ethiopian fiscal year, she stated.

Furthermore, “our Mobile Money business ‘telebirr’, which was introduced with the aim of meeting the country’s growing demand for digital finance services, has shown a tremendous growth surpassing the industries trend by acquiring more than 21.8 million subscribers within a short period of time with a total transaction value of 30.3 billion Birr.”

Telecom density has reached 63.3 percent, it was learned. 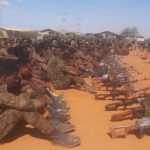