Donkey Meat up for Export

My name is Dr Bojia, country representative of the Donkey Sanctuary UK operations in Ethiopia. First of all I would like to congratulate you for pioneering to disclose the Donkey Abattoir issue to the general public

There are some clarifications that I feel should be made in the article Donkey Meat Up for Export, published on April 2, 2017 [Vol 17, No.883] in the three places where you have referred to the Donkey Sanctuary.

The writer says ‘The meat will be exported to Vietnam while the hide will be shipped to China, where it is a key ingredient for ejiao, a local medicine that is used to treat a range of ailments from colds to insomnia, according to studies conducted by the Donkey Sanctuary, an international animal welfare organization.’

The Donkey Sanctuary did not make any study that qualifies the use of gelatin obtained from donkey skin (Ejiao) for the mentioned statements. Rather we are questioning the scientific validity of the claims for the product. The study was made and claimed by Chinese scientists (see references listed on the last pages of the Donkey Sanctuary report).

The article also stated that ‘Donkey Sanctuary, a UK based firm that studies the global trade of donkeys, found out that the Chinese donkey population has fallen by more than 50pc to below six million. The major reason for the drop, according to Donkey Sanctuary, is a surge in demand for the skin and meat.’

The Donkey Sanctuary is a UK based donkey and mule welfare charity exclusively working to improve the welfare of working donkeys supporting livelihoods of communities in Ethiopia and many other countries around the world. The charity has never been involved in donkey trade or production of any sort in Ethiopia and elsewhere in the world. The charity also did not study donkey population of China. Please refer to FAO report cited in the reference section of the report who does population estimates and projection as a UN organization.

Thirdly, the article said ‘In the long term, the donkey trade might create a social and an economic disruption in Ethiopia, where 83pc of people are rural and transportation of commodities mainly depends on donkeys, according to Donkey Sanctuary.’

We share the views and potential consequences of social and economic disruption but we did not make the study. In the report, the source was anonymous. 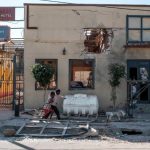