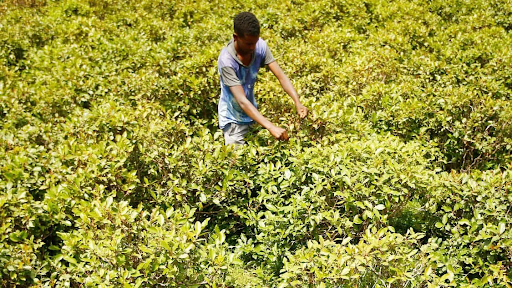 Bimrew Yismaw, is an 11 year old resident of Bahir Dar city. He wakes up every morning between 4:00 and 5:00 am. In these dark hours of the night, Bimrew has to use a torch to see his way as he walks a long distance to reach the khat farm where he works every day. His work at the farm is picking khat, which he does until mid-day. The khat he picks with other fellow kids is weighed every now and then and when it reaches a kilo, it is taken to the city by a motorcycle to reach the market on time. Bimrew says he picks as much as 4 kilos of khat a day. He and his friends get 40 birr per kilo, which has shown a raise from the previous 5 to 10 birr wage.

It has become an ordinary scene to observe children roaming the numerous khat farms, especially in the Zenzelma area, a place just outside of Bahir Dar city. These children, mostly aged 9 to 15, move quickly in the farms, picking khat with their little but quick fingers. Some of the kids are even shorter than the khat shrubs and can easily be lost from view. Most of the youngsters say that they work with the permission of their parents.

If they don’t bring food from home, they are forced to work from dawn until noon with an empty stomach. They don’t seem to realize the impact this hard labor will bring on their health when they pick the khat covered with pesticide or when they cut the unnecessary parts with their teeth – exposing them to addiction.

Bimrew’s father, Yismaw Kebede, is a small-scale farmer who doesn’t make enough income for the family. He says the money his son makes by picking khat is helping the family to get by.

“The family is benefiting from Bimrew’s income. What fault does it have for him to assist us?” he asks. Yismaw says he accompanies his son to the khat farm every morning so he won’t travel alone.

World Vision Ethiopia carried out a study in 2018 that revealed 64.4% of the children who join the labor force because of family destitution.

The eight year old Birtukan Gelaw lives in the Zenzelma neighborhood of Bahir Dar city and works on one of the khat farms in the area, collecting up to 3 kilos of khat everyday. She works from dawn to midday. She had quit school to be fully involved in this work. She told us that she was sent off because of her repetitive late-coming and absentee records. Still, she longs to go back to school.

In Bahir Dar and its outskirts, there are numerous khat farms. The fact that several children work on these farms is well-known among the public, if not talked out loud. In 2015, a research was conducted on child labor by the Ethiopian Statistics Agency that found out that 89.4% of the Ethiopian children, who are involved in labor, work on agriculral activities; on farms, forest development and fishing.

Biresaw Tadesse, a khat farm and shop owner, told us why he lets children work on his farm. He says the kids come to work on their own will; he is not forcing them in any way. He believes he is just giving them an opportunity to work and earn money to support themselves and their families. However, Biresaw admits that adults are not favored for such works. He says, “The children work with better efficiency as they can get around the khat trees agilely which allows them to pick more khat within a few hours.”

These children wake up at daybreak, trek long distances in the cold and dark to reach the khat farms, and get to work picking khat with their fingers. What’s more challenging is the fact that they have to cut the unnecessary parts of the khat branches with their teeth which exposes them to khat additions.

According to Ato Amare Bekele, a retired pesticides chemist at Amhara region’s Agricultural Quality and Safety Authority, khat farmers spray their farms with pesticides to prevent it from pests and increase its productivity. Among these chemicals DDT dichloro-diphenyl-trichloroethane, aldrin, dieldrin, and dimeton are used. The chemist says that some of these chemicals are banned in some countries.

Ato Amare says these chemicals can be hazardous, causing health problems to those who make contact with them. According to him, the chemicals may mainly affect those who consume (use) the khat. However, he shares his concern saying, “In the long run, it may also affect the health of the khat-picking children as well as they touch the pesticide-covered khat everyday.”

Ato Atnafu Belay, the acting director of the Amhara region’s Authority of Labor Affairs, says the worst forms of child labor are recruiting children for military, sexual acts, stimulant plants (drugs) cultivation and trafficing. These acts result in putting their permanent negative marks on the children’s physical and psychological makeup, affecting their health multi-dimensionally. Holding the children against their will and forcing them to work are also included among the worst forms of labor.

Though the children working on the khat farms in Amhara region are not forced to work by their employers, it doesn’t change the fact that they are exposed to heavy labor beyond the age capacity.

The acting director says it is a well-known fact that there is a wide range child labor going on in the region, including in the city of Bahir Dar. For this reason, he says, when there’s control assessments over work places in the region, child labor is one focal point given due attention.

Still, children do labor work at irregular work places that are not part of the control routine. These jobs include working as khat pickers, waiters in small cafes and also as taxi helps – calling for passengers and receiving fares on minibus taxis. This has made the control of the Labor Affair Office difficult.

The report of 2021/2022 fiscal year of Amhara region’s Labor Affairs Authority indicates that a special control system was to be carried out on 173 companies concerning their employment of children. However, only 146 companies were assessed. This shows that there are companies that escaped the process.

The acting director says that it is difficult to prevent child labor by just setting out control system. Awareness needs to be created among the public, making people realize the impact of child labor on their lives as adults. Such awareness creation works are being carried out in recent times, he says.

As much as there are many stakeholders in child labor issues like parents, employees, brokers and the children themselves, the challenge can not be solved only by the Labor Affairs Authority, says the acting director. Education, health, transport and other such sectors need to come together and work jointly, more than ever, to fight child labor.

International Labor Organization (ILO) reported in 2018 that agricultural activities take the lion’s share in child labor at international level at 67%. Service sectors make up 26% of child labor while household chores and industries take 7% each. This is also true in Ethiopia, with many of the children doing labor beyond their age involving in agricultural works.

This 2018 report also indicates that 152 million children are being exploited in child labors all over the world. Male children are more exposed to labor than female children. However, the figures show that there’s a slight decline of child labor abuse from its 13.6% in 2008 to 11.6% in 2012, according to the 2018 ILO report.

The case of Ethiopia is no different. Children who are aged between 5 and 17 are exposed to child labor abuse, says the Ethiopian Central Statistics Agency’s account. 64% of these children are found in Amhara region while 54.4% are in Oromia region. World Vision Ethiopia’s study backs this up by specifying that 60.3% of employers in Ethiopia hire children who are under 14 for labor work.

Tamirat Desta, a lawyer and legal issues consultant, elaborates on Ethiopian law in relation to child labor abuse. “The law says dispatching children on harvesting and distributing stimulants is a crime. Paragraph 525 talks about the illegal acts of harvesting, distributing or using poisonous or narcotic plants while it further asserts that recruiting children for such works is punishable by the law,” he says indicating the responsible body may be sentenced to more than 10 years, if convicted.

Apart from signing international conventions, Ethiopia has a constitution that draws the line on the age of laborers (minimum age being 15) and the specific labor works they are not to be part of (including cultivation and distribution of stimulant plants). Labor Affairs Proclamation No. 1156/11 has also a directive that asserts on restating activities prohibited for young workers, like being part of the military, sexual works and drug trafficking.

Still, child labor is practiced at large in the country, Amhara region taking the biggest share, as the statistics show. The children roaming the fields of khat farms in and around Bahir Dar can attest to this claim. The proclamations, policies, laws and directives are not protecting the children who are woken up before sun-rise to travel away from home on foot and work on khat farms with empty stomachs. Their employers say the children are paid for their labor and they are not coming to work by force. Their parents say, “What fault does it have for a child to work and support his family?” With all the concerned bodies turning blind eyes on the actual matter, children as young as seven year olds have continued to do heavy, repetitive and hazardous labors – sacrificing their childhood, health and dignity. 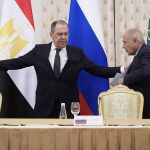 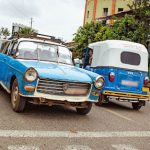