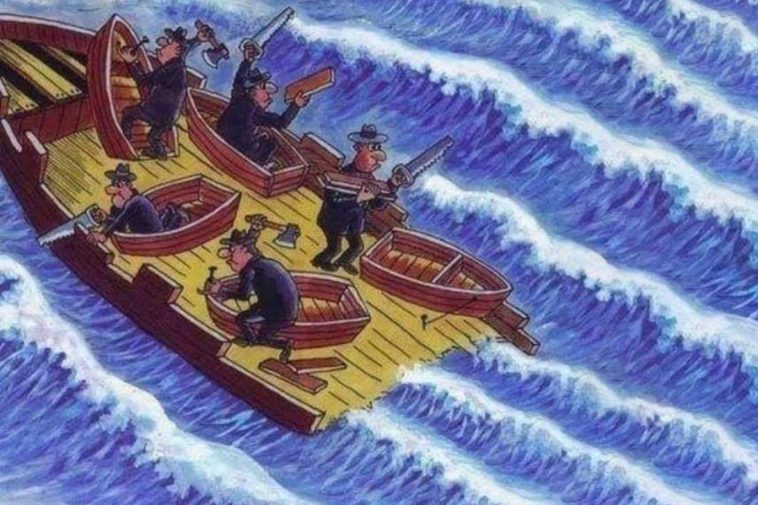 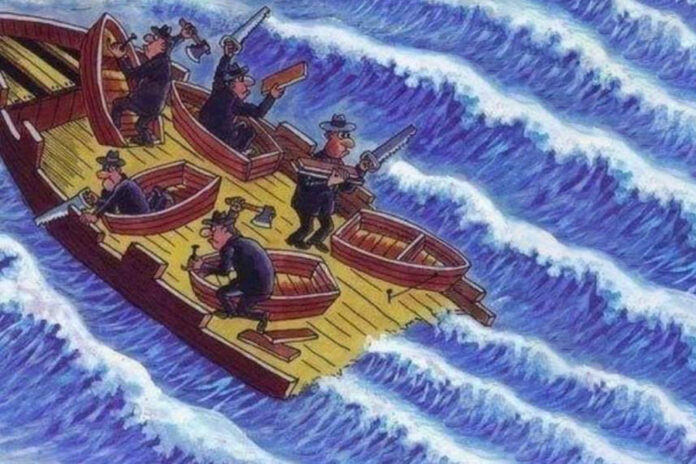 Almost all major narratives that are currently dictating the organization and various pursuits of the human collectives are based on extremely flawed and dangerous conceptions. The spheres of politics, economics, culture, science & technology, etc. all depend on these short sighted and destructive principles for their operational blueprints. These dominant paradigms are construed as if they were benign necessities that are neither harmful to social harmony nor detrimental to the planet’s ecosystem! Expectedly, trying to deconstruct these farcical narratives can trigger untold aggression from global establishments, whether they operate at the local or global level. In this regard, the role of the ‘deep state’ is paramount! To recall; we have defined the ‘deep state’ as the military-intelligence-industrial-banking-media-complex of the core states of the world system!
The current global economic model is constructed and maintained, primarily to serve the interests of the 1%. The old justification of the system, which was to ‘pacify the struggle for existence’, has been passé for decades! Unnecessary services/overproduction in all sectors of economic activities are causing damage to the ecosystem and have failed to bring much desired happiness to the consuming sheeple. Granted, there are still plenty of sheeple that still don’t have the basics on our planet, but the way to go about furnishing the essentials to them, (with what they need, not what they want) must be changed, per force. The fact is; the ‘limit to growth’ is upon us and we cannot pretend as if nothing has changed since the start of industrialization. Moreover, the entrenched polarization the world system has created, both within and between countries, is not a sustainable model to pursue, even from narrow point of view of geopolitics. Alternative systems of collective existence must be swiftly initiated if humanity desires a bit more time on the blue planet!
Why is such an obvious destructive system still pervades life? Amongst other things, the system has honed very effective tools to numb incipient alternatives. A worldwide indoctrination network, pointedly leveraging the various organs of orientations, is one of the major weapons of the system. Educational institutions, the media, the globalized entertainment systems (including spectator sports), occupations, etc., all play decisive roles in the project of zombifying the world’s sheeple. Otherwise, how on earth can people accept the irrational notion of ‘infinite growth on a finite planet’? It is the cumulative result of powerful indoctrination as well as the subtle economic serfdom bestowed on the sheeple that has solidified the prevailing collective economic consciousness, which is based on insanity, literally speaking! What is even worse is the fact that this distorted economic narrative forms the foundation of all other institutional superstructures. Electoral democracies, even interpersonal relationships like love, are increasingly dependent on derived values, from the logic of un-tempered accumulation, facilitated by the prevailing unholy ideology of neoliberalism.
‘Neo-liberalism: A form of free market fundamentalism that has been the dominant global economic ideology for the last 30 years in which profit and ‘efficiency’ are the central goals of society. It is a framework focused on reducing the role of the state and taxation, while promoting privatization, deregulation and corporate trade deals. This has led to soaring inequality, whereby just 8 people have the same wealth as half the world’s population and an environmental crisis in the form of unprecedented species loss and dangerous climate change.’ (FOE)
These days even the sciences are tainted. Interaction between the sheeple and the scientific community seems to be vacuous. The intention of neoliberalism seems to be the baffling of the sheeple so that critical collective consciousness is frustrated, derailed and stunted. Overwhelming the sheeple is always easy; after all, who is Joe Doe to question the status quo that gave us the Internet, mobile phone, air travel, etc., etc. Baffling has emerged as another of the dominant narratives of the world system. Frankly speaking, more tech and more big science have become instruments, not only to dumb down human cognition, but also in confine the sheeple within the narrow scope of establishment dogmas. In addition, entrenched interests/status quo encourages the absolutely fantastic. Ridiculous ideas as interstellar travel, (in not so distant future) or resource importation from outer space or dematerialized transportation to roam the galaxies, etc., etc. are all used to build fictitious narratives to sustain confidence on the reigning system. Once criticality is eliminated from social discourse, anything can go, and this is what we are witnessing amongst the gullible all over the world. Science fiction and reality are intentionally mixed, compliment of sophisticated indoctrination that spares literally no one, save the critically/scientifically inclined!
The ruling psychopaths/sociopaths of our world system do not really care whether life support systems here on our planet collapse or not, so long as accumulation is unimpeded. For these sickos money is more important than life. The wealth of experience that can be savored from simple living originating from the appreciation of creation is reprehensible to the greedy parasites!