Addis Abeba – Ethiopian Electric Power (EEP), the state-owned electric producer in Ethiopia, signed a memorandum of understanding to supply electricity to South Sudan, according to the state utility.

The agreement includes the construction in a short period of time of 357 kilometer long, 230 kilovolt line from two substations in the Gambella regional state to the Malakal State of South Sudan, the capital of Upper Nile State.

In the long run, the agreement considers the construction of up to 700 kilometer long, and 400 or 500 kilovolt electric line from Teppi, in South West Ethiopia, to Bor, South Sudan central region. Accordingly, the two countries agreed to form a joint technical committee to begin implementation of future works, Ethiopian Electric Power said. AS 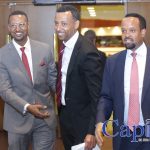