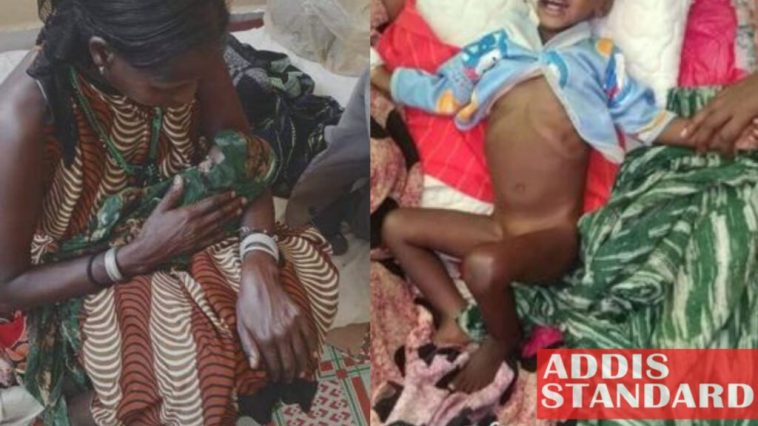 Addis Abeba – Eight out of 21 zones in the Oromia region are experiencing drought, according to the regional government. Addis Standard’s consecutive reports have covered the rather under-reported impact of the drought on the lives of people across Bale, East Bale, Borana, Guji, West Guji, East Hararghe, West Hararghe, and East Showa, as well as ten zones in the Somali region. The widespread drought has resulted in deaths and forced many into fleeing their homes. The economic impact resulting from inflation and massive loss of livestock and agricultural products which in many cases are the sole source of income for many forced many to flee their homes and even enlist in the military. The latest reports that reached Addis Standard indicate that women are exceptionally affected by the multifaceted impact of the drought that is getting worse across Oromia and Somali regions according to the United Nations Office for the coordination of Humanitarian Affairs (OCHA).

Women, particularly in a patriarchal society, carry the brunt of natural disasters like drought and their socio-economic crises in their daily household chores to broader issues that affect society at large. Reports of widespread incidents of infant death, stillbirth, and miscarriages resulting from severe starvation reached Addis Standard as it continued uncovering the underwhelming response the drought has gotten from the government. In less affected areas, women are forced to travel 18+ hours on foot to fetch water.

Chala, a resident of the East Bale zone works as a paramedic. He witnesses the silent suffering of women in the drought on a regular basis. Miscarriages and stillbirth experienced by starving pregnant women mark Chala’s regular day at work. “The women are starved and their body can’t resist disease, so they have a miscarriage. I see at least seven to ten women per week go to the zonal hospital because of this,” he told Addis Standard.

He recounts, “Pregnant women don’t have the energy to give birth. We have to take them to the zonal hospital in Ginnir which is 90 to 120 Kms from rural areas. When they reach the hospital most of the time the doctors will only be able to save the mother.”

Likespoke Chala, Khadija is another resident of the zone whose husband is working as a daily laborer in Saudi Arabia expressed her fear of worsening socio-economic crisis as this is just the beginning of drought aftermath when she spoke to Addis Standard about the effect of the road on women and children.

She explained how in an area where women are in charge of the household, drought and the subsequent lack of proper response are affecting women and their roles. She said, “We have children to send to school, how can we send them to school if we are not able to feed them in the morning, how can we send them to school when there is no water to wash their clothes with or cook food with.”

She went on to explain, “I have a husband who is working outside the country and providing for me but what about those women whose responsibility is to fetch water, send children to school and take care of the household.”

A doctor from Ginnir Hospital who preferred anonymity corroborated Chala’s testimony and explained, “The living standard of people living in the desert areas is suboptimal. It is normal to see maternal malnutrition, but currently, the cases are surging.”

“Pregnant women don’t have the energy to give birth. We have to take them to the zonal hospital in Ginnir which is 90 to 120 Kms from rural areas.”

“Everyone will suffer in drought-stricken areas. But currently, 10 to 20 children with severe acute malnutrition are admitted to our hospital,” said the doctor while expressing fear that the number of children with malnutrition will increase. He added, “This society has a malnutrition baseline even before the drought. The impact of the drought is just beginning, the situation is worrisome.”

The situation is no different in Borana. Dr. Godana Halake, medical director of Megga Hospital said, the general Borana zone population is experiencing malnutrition not only children under five but also women, children and elderly have been treated for malnutrition in Megga hospital.” According to him, Megga hospital has seen a surge in miscarriage, low birth weight, and stillbirth cases.

Dr. Godana added “So far we have treated six children for malnutrition in our hospital. Some are still receiving treatment, others are discharged except for one who lost his life due to complications aside from malnutrition.”

One case is the case of Loko Garbole’s month-old baby, admitted to Megga hospital suffering from diarrhea. Describing her pregnancy months she said, “I don’t have anything to eat. I don’t have a penny to buy food.” Loko took her month-old baby to the hospital on foot, spending several nights on the road. “I walked to the hospital spending nights on the road, because I didn’t have money to pay for transportation,” Loko said.

In many instances in the Oromia region especially in drought-hit areas, men leave to work either in big cities and towns across Oromia or abroad, leaving women in charge of the household affairs.

Loko, Khadija, and many other Oromo women’s experiences are shared by women in the neighboring Somali region. Fatihiya is a mother of two and is originally from Afdher zone in the Somali region, she is now residing in Ginnir, the administrative capital of the East Bale zone with her husband.

“I walked to the hospital spending nights on the road, because I didn’t have money to pay for transportation.”

Loko, a mother from Borana zone

She recalled the reason they fled their home, “We are originally cattle herders but the absence of rain and the death of our cattle as result forced us to flee. My husband could not sell the cattle we had left as their prices went down and I couldn’t take care of the children as the water was scarce, every consumer good was becoming expensive. We had to leave to a better place where we can find work.”  She added, “What Somali women are going through at the moment is not a minor issue, we have pregnant women who are affected and could have miscarriages, we have children out of school.”

According to a report released by UNICEF in February. 2022, more than 100,000 pregnant and breastfeeding women are affected by drought and in need of immediate assistance.

The effect of malnutrition and dehydration women and their pregnancies: Expert opinion

Tigist Tolera, Dona Trained Birth Doula, based in Tucson Arizona explained how food and water shortage affects women’s bodies during pregnancy. She said, “A woman’s body needs extra calories and a balanced diet which consists of enough protein, vitamins, and minerals during pregnancy to support the extra demand a pregnancy brings to her body. Not having a well-balanced diet and being starved not only affects her but also the growing fetus inside and will also have an ongoing consequence on the health of the child; even through adulthood.”

She further explained, “Malnourished women becoming pregnant and those who are starving during pregnancy are at higher risk of having miscarriages, congenital anomaly, preterm birth, low birth weight baby, anemia, stillbirth, other medical conditions related to pregnancy and even maternal death. Studies show that babies born from mothers who were starved during pregnancy suffer from long-term complications of diabetes, hypertension, and cardiovascular problems during their childhood and their adult life. In addition, female babies born in this condition suffer from long-term reproductive problems like infertility and early menopause.”

“Starving pregnant women lose a lot of weight as their body starts adapting to starvation. Their body’s reserve of essential nutrients like iron, vitamins, and minerals will be saved for the baby. A malnourished woman during the early stages of pregnancy who continues to starve during this time is at higher risk of having miscarriage since she is at higher risk of developing infections as her immunity is very low.

Lack of essential nutrients like folic acid/folate, iron, calcium, Vitamin D, and other essential nutrients might cause fetal anomalies and functioning placenta increasing her chance of having a miscarriage. Additionally, malnutrition poses a greater risk to the baby’s weight gain. Low birth weight babies are at higher risk of dying before birth because they are not able to withstand the stress of labor or after birth since the mother is unable to breastfeed,” she added explaining the severe effects of malnutrition.

She went on to explain the effects of dehydration, “Enough hydration during pregnancy is also a prerequisite to having adequate amniotic fluid which is very essential for fetal wellbeing. Maternal dehydration causes oligohydramnios (very low amniotic fluid) and early uterine contractions which causes preterm labor,” she added, “Placental insufficiency (inability of the placenta to support the fetus) or rupture of the membrane which creates leakage of the amniotic fluid leading to preterm labor or infection are some of the complications related to oligohydramnios.”

She also described how hard labor is for women affected by drought. She said, “Dehydrated and starved/malnourished women don’t have enough energy to go through labor. Most starved women, who are able to carry their baby to term will die during labor as labor is a very high energy demanding state and they won’t be able to tolerate normal blood loss after birth as they already are anemic and they are at higher risk of having a postpartum hemorrhage. Their chance of losing their babies during labor and giving birth to a dead baby will also be higher if their labor was long or far from a health care facility since women with these complications are usually those living in rural areas whose access to healthcare facilities is very limited.” AS 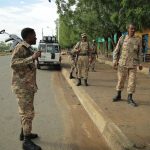 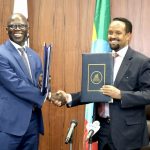