A mass vaccination of the Oral Cholera Vaccine(OCV) has officially been launched on May 11 2022 at the Abosto Health Center in Shashemene town bringing in together pertinent stakeholders of Shashemene woreda and town administration officials, woreda and town health bureau officials, zonal health bureau officials, regional officials, community elders, religious leaders, media, the Armauer Hansen Research Institute(AHRI), Ethiopian Public Health Institute (EPHI), International Vaccination Institute(IVI) and LG Electronics (LGE) teams who joint hands to transmit key messages as well sensitize the community to increase awareness and acceptance of the vaccination.
The pre-emptive cholera vaccine will be administered to a hundred thousand residents of the area, of which 40,000 people will be from the Shashemene town, whilst 60,000 people will be from Shashemene woreda. For the OCV to be fully protective, two doses are recommended to be given 14 days apart to which the first round of this vaccination is set to run from May 11-15, with the complimentary second dose taking place from May 25-29. 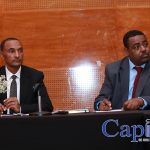